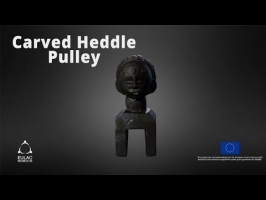 Image credits | Créditos de imagen | Créditos de imagem
EU-LAC-Museums
Title, name | Titulo, nombre | Título, nome
Heddle pulley with carved head
Short description | Descripción corta | Descrição resumida
It was common for men to do weaving in West African countries. By means of heddle pulleys the weavers separate the warp threads into ‘fans’ by means of foot pedals. Then the weft threads are ‘shot through’ these ‘fans’. Thus, fabric is created. These heddle pulleys were often carved, and with this one, a face can be made out on one of the sides. Often the faces were of goddesses, so the weavers could look at beauty while they work. Baule peoples and their neighbors to the West, the Guro, are famous as weavers, and are known for their fine indigo-and-white cotton fabrics. Scholars have suggested that the prominent display of pulleys, hanging over the weaver’s loom in the public place, afforded artists their best opportunity to showcase their carving skills, in the hope to attract commissions for figures and masks. This figurative pulley with carved a head demonstrates the efforts put by Baule and Guro artists into beautifying the simplest functional object.