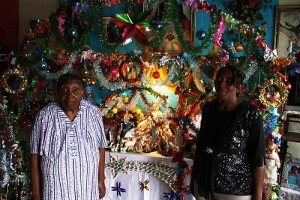 Image credits | Créditos de imagen | Créditos de imagem
Ministry of Culture of Peru, 2016 in Unesco ICH website
Title, name | Titulo, nombre | Título, nome
‘Hatajo de Negritos’ and ‘Hatajo de Pallitas’
Short description | Descripción corta | Descrição resumida
‘Hatajo de Negritos’ and the ‘Hatajo de Pallitas’ from the Peruvian south-central coastline are two complementary expressions featuring music and singing as part of Christmas celebrations, hailing from the central department of Ica in Peru. The expressions are biblical representations of the story of the visit of a group of shepherds to the new-born baby Jesus and the arrival of the Wise Men. Both expressions combine pre-Hispanic Andean values with the European Catholicism and rhythmical inheritance of African descendants arriving in the Americas in colonial times. This complexity has allowed both expressions to become representations of the mestizo and afro-descendant identity of the region. The dance of the ‘negritos’ is mostly performed by men to the tune of a long fiddle, along with singing, shoe-tapping dance and bells. The dance of ‘pallitas’ is performed by women to the sound of the guitar or fiddle, accompanied by a ‘zapateo’ and singing. Both dances – regarded as symbols of religious devotion and spiritual contemplation – are performed by groups of up to fifty people in town squares and churches in December and January, as well as in family homes.
Community or culture | Comunidad o cultura | Comunidade ou cultura
Communities of ICA
Practitioners, Autor | Practicantes, Autores | Praticantes, Autores
Museum | Museo | Museu
Place | Local | Local
Ica
Country | País
Peru
Language | Idioma