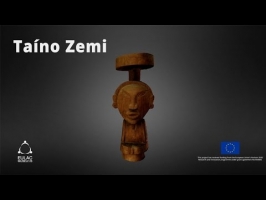 Image credits | Créditos de imagen | Créditos de imagem
EU-LAC-Museums
Title, name | Titulo, nombre | Título, nome
Taíno Zemi
Short description | Descripción corta | Descrição resumida
This small figurine is a Taíno Zemi. A Pre-Columbian artefact from the Taíno people who inhabited the Caribbean centuries before the arrival of the Europeans around 1492. They were wiped out by European colonialism. This figurine was an important aspect of their culture, representing their religious beliefs. The zemis were modelled after Taíno deities and the Taíno would communicate with them through the inhalation of a hallucinogenic substance called cohoba, which they placed on top of the figurine’s small bowl above its head.

This figurine is a replica. The original zemi was excavated in Jamaica, and now resides in the British Museum, though not on display.
Community or culture | Comunidad o cultura | Comunidade ou cultura
Practitioners, Autor | Practicantes, Autores | Praticantes, Autores
Museum | Museo | Museu
Barbados Museum and Historical Society