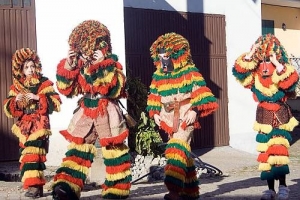 Image credits | Créditos de imagen | Créditos de imagem
Patrícia Cordeiro, 2015 in Unesco ICH website
Title, name | Titulo, nombre | Título, nome
Winter festivities, Carnival of Podence
Short description | Descripción corta | Descrição resumida
Winter festivities, Carnival of Podence is a social practice which initially functioned as a rite of passage for men. Now extended to women and children, it has been readjusted to its contemporary context. The festivity is associated with the celebration of the end of winter and the arrival of spring and takes place over three days in the streets of the village and in the houses of neighbours who visit each other. During the performance, the Caretos – modelled on the traditional masked character – dance around women with their cowbells, rhythmically moving their hips. Possibly connected symbolically to old fertility rites, this action is performed by those behind the mask as a way of interacting with others anonymously. The Caretos wear tinplate or leather masks, costumes covered with colourful wool fringes and small bells. On the Monday night, there is a theatrical play, when a group of men announce a fictional list of engaged couples, satirizing them and eliciting collective laughter. On Shrove Tuesday, some people mask themselves as ‘matrafonas’, a masked character from rural carnivals. On Tuesday afternoon, the ritual of the burning of a Shrovetide figure takes place, and the group of Caretos then goes around the homes of friends and relatives. Participation in the Carnival begins during childhood, and the activities of the Group of Caretos Association have considerably boosted opportunities for transmission.
Community or culture | Comunidad o cultura | Comunidade ou cultura
Community of Podence
Practitioners, Autor | Practicantes, Autores | Praticantes, Autores
Museum | Museo | Museu
Place | Local | Local
Podence
Country | País
Portugal
Language | Idioma