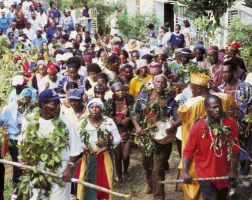 Image credits | Créditos de imagen | Créditos de imagem
Unesco / Andrew P. Smith
Title, name | Titulo, nombre | Título, nome
Maroon heritage of Moore Town
Short description | Descripción corta | Descrição resumida
Situated in the highlands of eastern Jamaica, Moore Town is home to the descendants of independent communities of former runaway slaves known as Maroons. The African ancestors of the Moore Town Maroons were forcibly removed from their native lands to the Caribbean by Spanish slave traders in the sixteenth and seventeenth centuries. The term Maroon, derived from the Spanish word cimarrón (wild), refers to those slaves who fled the plantations in the early 1600s and established their own settlements in the Blue and Johncrow Mountains of eastern Jamaica. By the early eighteenth century, the Maroon communities controlled much of the eastern part of the island. In opposition to the expanding plantation system of the British, they formed well-organized and efficient underground military units. After decades of warfare, the British finally yielded to the communities’ demands for recognition of their autonomy by signing a treaty with the Maroons in 1739. Hailing from West and Central African regions with diverse languages and cultural practices, the Moore Town Maroons elaborated new collective religious ceremonies that incorporated various spiritual traditions. These expressions and practices, which were then named Kromanti Play, continue to represent the very foundation of Maroon identity. During Kromanti ceremonies, dances, songs and specific drumming styles are performed to invoke ancestral spirits. These ceremonies also feature a language of African derivation, likewise named Kromanti, and rare medicinal preparations. As part of their heritage, the inhabitants of Moore Town also possess a unique system of communally-held “treaty lands”, a local political structure and the use of the abeng, a side-blown “talking” horn of Jamaican origin which serves as a means of long-distance communication. Several decades of missionary opposition to Kromanti Play have driven this tradition partially underground and have led to serious schisms within the communities. Moreover, deteriorating economic conditions have forced many Maroons to migrate to other parts of Jamaica and abroad.
Community or culture | Comunidad o cultura | Comunidade ou cultura
Moore Town Maroons
Practitioners, Autor | Practicantes, Autores | Praticantes, Autores
Moore Town Maroons
Museum | Museo | Museu
Place | Local | Local
Blue Mountains and John Crow Mountains of Portland
Country | País
Jamaica
Language | Idioma
Kromanti, Jamaican Maroon Creole

Origin, history | Origen, historia | Origem, história
Escaped slaves during the Spanish occupation of the island of Jamaica fled to the interior and joined the Taíno living there, forming refugee communities. Additional slaves gained freedom during the confusion surrounding the 1655 British invasion. Refugee slaves continued to join them through the decades until the abolition of slavery in 1838. During the late 17th and 18th centuries, the British tried to capture them because they occasionally raided plantations, and made expansion into the interior more difficult. An increase in armed confrontations over decades led to the First Maroon War in 1731, but the British were unable to defeat the Maroons. They finally settled with the groups by treaty in 1738 and 1739, allowing them to have autonomy in their communities in exchange for agreeing to be called to military service with the colonists if needed.

Due to tensions and repeated conflicts with Maroons, the Second Maroon War erupted in 1795. In an effort to break up the Maroon communities, the colonial government deported approximately captive 600 maroons to Nova Scotia. Due to their difficulties and those of Black Loyalists settled at Nova Scotia and England after the American Revolution, Great Britain established a colony at Sierra Leone in West Africa. It offered ethnic Africans a chance to set up their own community there, beginning in 1792. Around 1800 a number of Jamaican Maroons were transported to Freetown, the first settlement of Sierra Leone.

The only maroon settlement retaining some formal autonomy on Jamaica after the Second Maroon War was Accompong, in St. Elizabeth Parish, whose people had abided by their 1739 treaty with the British. A smaller historic community of Maroons is also located at Charles Town, on Buff Bay River in Portland Parish. Another is at Moore Town (formerly Nanny Town), also in Portland Parish. In 2005 the music of the Moore Town Maroons was declared by UNESCO as a 'Masterpiece of the Oral and Intangible Heritage of Humanity.'[18] A fourth community is at Scotts Hall, also Portland Parish.[19] Accompong's autonomy was ratified by the government of Jamaica when the island gained independence in 1962.

The government has tried to encourage survival of the other Maroon settlements. Since 2008, the Jamaican government and Maroon communities have held the Annual International Maroon Conference at rotating communities around the island. Maroons from other Caribbean, Central and South America nations are invited.[19] In addition, Accompong's colonel and a delegation traveled in 2016 to the Kingdom of Ashanti, Ghana to renew ties with the Akan and Asante people of their ancestors.[20]
Associated heritage | Patrimonio asociado | Património associado
Cross reference | Referencias cruzadas | Referências cruzadas
Present condition | Condición actual | Estado actual
Threats | Amenazas | Ameaças
Safeguard | Salguardia | Salvaguarda
Bibliography | Bibliografía | Bibliografia
Source | Fuente | Fonte