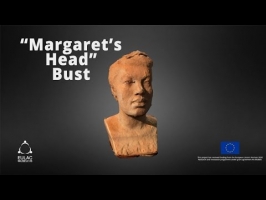 Image credits | Créditos de imagen | Créditos de imagem
EU-LAC-Museums
Title, name | Titulo, nombre | Título, nome
"Margaret's Head" by Karl Broodhagen terracotta
Short description | Descripción corta | Descrição resumida
Karl Broodhagen (1909–2002) was a Guyanese-Barbadian artist, working mostly in sculpture and paint. Originally arriving to the island to become a tailor’s apprentice, he was awarded a British Council scholarship in 1952 and migrated to London during the Windrush era to study at Goldsmith’s College in London. His experience there exposed him not only to European art, but to non-European cultures, particularly African Art. He returned to Barbados after his studies.

He is known for the creation of public statues in Barbados: The Emancipation Statue (officially titled “Slave in Revolt”) on the J.T.C Ramsay roundabout, of Grantley Adams at the Prime Minister offices, and of Garfield Sobers, at Kensington Oval.