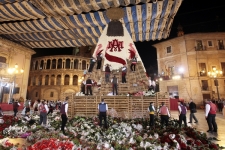 Image credits | Créditos de imagen | Créditos de imagem
Josep Zaragoza in Unesco ICH website
Title, name | Titulo, nombre | Título, nome
Valencia Fallas festivity / La fiesta de las Fallas valencianas
Short description | Descripción corta | Descrição resumida
The main feature of the Fallas Festivity, a tradition of communities in Valencia and its diaspora celebrating the coming of spring, is the giant falla. The falla is a monument made up of ninots (caricature pieces) created by local artists and craftspeople that provides a commentary on current social issues. Erected in the town square, the falla is set alight at the end of the festivity, which runs from March 14 to 19, to symbolize the coming of spring, purification and a rejuvenation of community social activity. In the meantime, marching bands parade the streets, outdoor meals are held and fireworks staged. Each year, a Fallas Queen is elected to promote the festivity throughout the year encouraging locals and visitors to take part. Know-how associated with the practice is transmitted within families, particularly those involved in the construction of the ninots who belong to different guilds among participating communities. The Fallas Festivity provides an opportunity for collective creativity and the safeguarding of traditional arts and crafts. It is also a source of community pride, contributor to cultural identity and enhances social cohesion. In the past, the festivity was also a way of preserving the Valencian language when it was prohibited.