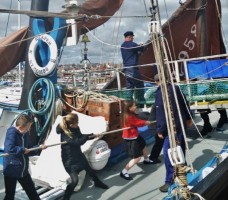 Origin history | Origen Histórico | Origem história | Origine historique
Documentation | Documentación | Documentação | Documentation
Access type | Tipo de acceso | Tipo de acesso | Conditions d'accès
Adult: £9.00, Concession: £7.00 (Seniors, Disabled & Student) Child: Free (max 5 children up to 16yrs, accompanied by an adult) Members: Free
Activities and services | Actividades y servicios | Actividades e serviços | Activités et services
From the earliest recorded history of Anstruther, fishing was the mainstay of the town. At one time, more fish were caught, processed and traded here than at any other harbour in Scotland. The fishing industry also supported many associated trades, and was responsible for a large percentage of trade in its own right. Cured fish were exported to other parts of Scotland, to England, and abroad to Europe.

However, by the latter 20th century, the fishing industry was changing and Anstruther was no longer as important as a fishing harbour. A group of people, concerned that a way of life would disappear without any trace or recognition, got together to form the Scottish Fisheries Museum Trust, with the aim of establishing a museum to mark the fishing heritage of Scotland. Anstruther, with its past importance to the industry, was the obvious location to choose. A Committee was set up in 1965 to begin the project and the Scottish Fisheries Museum Trust established in 1967.