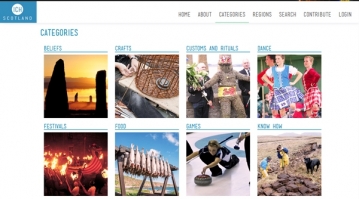 Origin history | Origen Histórico | Origem história | Origine historique
This website builds on a previous site developed by Edinburgh Napier University, funded by the AHRC, which was handed over to Museums Galleries Scotland (MGS) in November 2011.
MGS has developed the new site to enable greater ease for users when searching / browsing the site and contributing content.
This site aims to:
- provide a dynamic record of Scotland’s ICH practices
- promote general awareness of ICH in Scotland
Documentation | Documentación | Documentação | Documentation
Access type | Tipo de acceso | Tipo de acesso | Conditions d'accès
Activities and services | Actividades y servicios | Actividades e serviços | Activités et services
The content on this site is provided and maintained by people just like you. We need your contributions for this site to represent the wide range of ICH activity taking place in Scotland. If you would like to add an entry to the site, please sign up and become a contributor.
The ICH Scotland Website is an online collaborative inventory. That is, an association of individuals and groups working to develop a common resource of human knowledge. Although it is not fully open access, the structure allows registered individuals to add and edit content. Please be advised that, while all attempts are made to provide the most accurate information, nothing found here has necessarily been reviewed by people with the expertise required to provide you with complete, accurate or reliable information.
That is not to say that you will not find valuable and accurate information in the ICH Scotland Website. However, we cannot guarantee the validity of the information found here. While it is very unlikely, the content of any given article may recently have been changed, vandalized or altered by someone whose opinion does not correspond with the state of knowledge in the relevant fields. Note that most other encyclopaedias and reference works also have similar disclaimers.
Museums Galleries Scotland does not actively moderate or pre approve content for this site and accepts no responsibility for the content of any contributed material, however if anything of an offensive nature is reported to us we will investigate it and remove the material where necessary.

Image credits | Creditos de imagen | Créditos de imagem | Crédits photo
ICH Scotland, Museums Galleries Scotland (MGS)
Type | Tipo | Tipo | Type
online wiki
Short description | Resumen | Resumo | Description brève
Cultural heritage includes the traditions or living expressions of groups and communities, such as oral traditions, performing arts, social practices, rituals, festive events, knowledge and practices concerning nature and the universe or the knowledge and skills to produce traditional crafts. While these may not be tangible – they cannot be touched – they are a very important part of our cultural heritage. This is Intangible Cultural Heritage (ICH), a living form of heritage which is continuously recreated and which evolves as communities adapt their practices and traditions in response to their environment.

It provides a sense of identity and belonging in relation to our own cultures which in turn promotes respect and understanding for the cultures of others. People play the key role in the creation and carrying forward of ICH. Communities, collectively, are the ones who create, carry and transmit ICH. A community might share an expression of intangible cultural heritage that is similar to one practiced by others.
While ICH expressions can have either material or non-material outcomes, the key distinction between intangible and tangible cultural heritage is that the former are living examples of human creativity and ingenuity, embedded in the community.

The approach to ICH in Scotland is an inclusive approach which respects the diversity of Scotland’s communities. It is underpinned by UNESCO’s 2003 Convention for the Safeguarding of the Intangible Cultural Heritage, which is intended to raise awareness of, respect for, and safeguard ICH worldwide.